SunMaster  Solar gets five stars in all aspects of the service they provide, from the design to the arrival of the material, the communication is clear and precise. As an local operatorof renewable business, the support of the whole team at SunMaster is invaluable to me. They always have my back making sure I don't miss something." 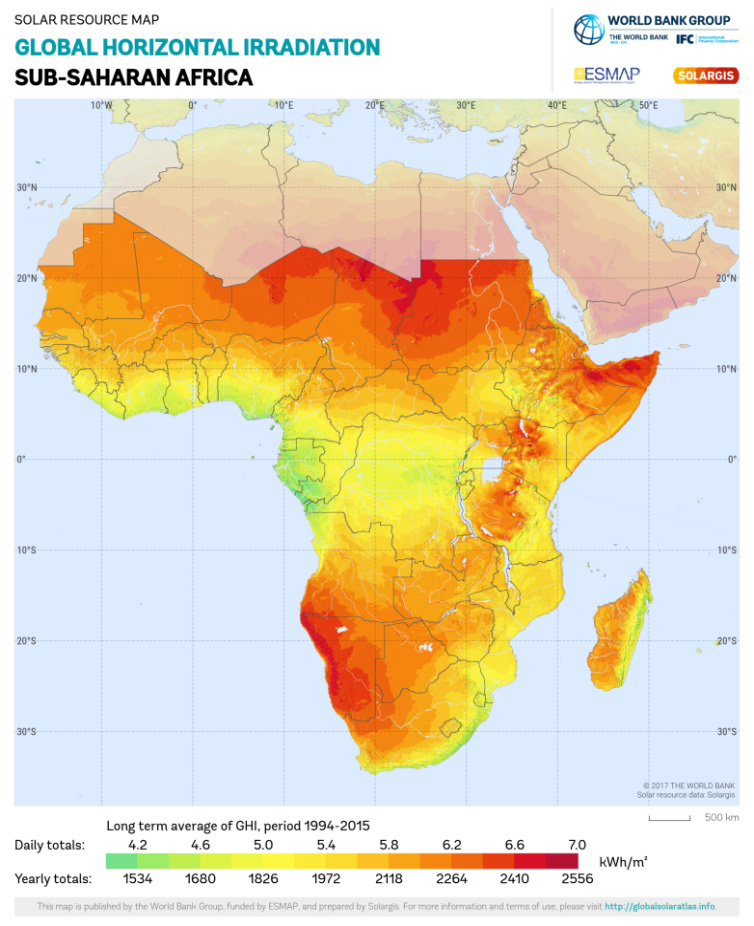 Africa is often considered and referred as the "Sun continent" or the continent where the Sun's influence is the greatest. According to the "World Sunshine Map", Africa receives many more hours of bright sunshine during the course of the year than any other continent of the Earth:many of the sunniest places on the planet lie there. The unlimited energy from Sunlight have afforded the further adoption of renewable solar technology in the golden continent.

The off-grid solar power system is an independent self-sufficient renewable energy power supply system, Itis very useful for the power shortage area which are far away from power plants and public power grids.

This Cameroon based 10KW solar plant project designed and manufactured by SunMaster.

The PV system is made up of six parts, including solar panels, inverter, batteries, MPPT solar charge controller, PV combiner box and mounting bracket. The final designed drawing as bellowing:

The solar panels are connected to the solar charge controller, it produces the energy to first satisfy user’s daily electricity power consumption, and then the superfluous power is stored in the batteries for use at night and during overcast and rainy days. When the power in the batteries is used up, a majority of inverter can support the input of mains supply (or the diesel generator) as the supplementary energy source for the load.

Get to know how much power of the load

In order to ensure reliability of the off-grid PV system, SunMaster made a thorough survey of customer demands for the electricity. That is to figure out how much power needed, including the power ratings of all the appliances or devices, running time and the daily electricity consumption (i.e. How many kilowatt-hours it is in total). After that, the design of the off-grid solar power system are mainly based on these data, including the solar inverter selection, solar panel capacity calculation, and batteries capacity calculation.

Below are  details power consumption sheet: 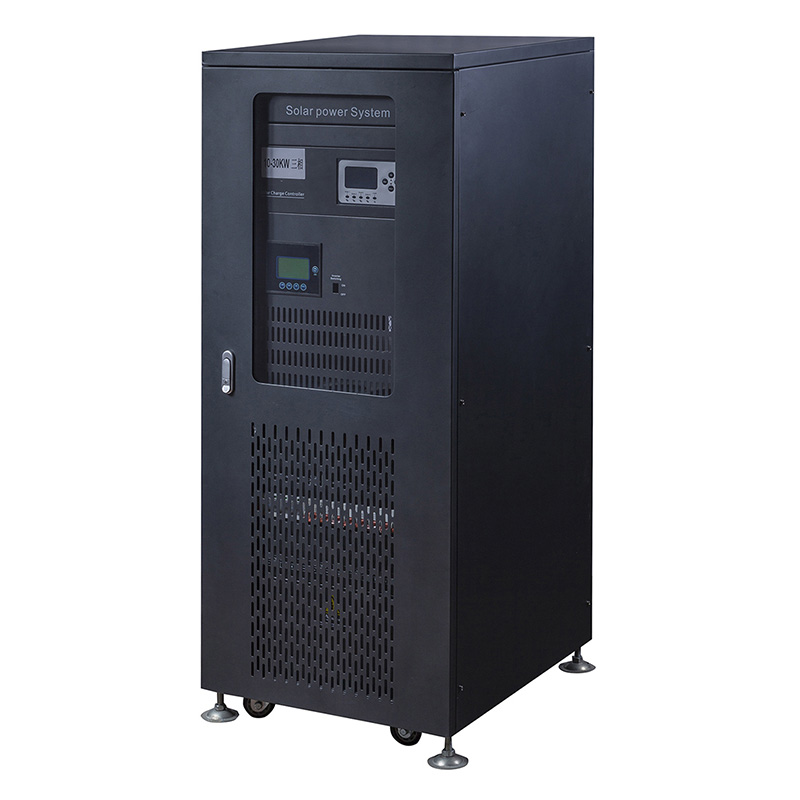 The power rating of solar inverter to be selected should not be smaller than the total power of the loads. However, considering the lifespan and follow-up capacity expansion of the inverter, certain margin of safety should be left for the inverter power, which is generally 1.2 to 1.5 folds as much as that of the load power.

According the users DAILY SYSTEM ENERGY REQUIREMENTS sheet, the total appliance load (already taken the inductive power considered) is 10.72KW,so we can figure out the inverter capacity should be10KW.

The power generated by solar panel modules in the daytime is partly for the load use, and the remaining is for charging the storage battery. When the night comes or when the solar radiation is inadequate, the electricity in the storage batteries will be discharged for the load use. Thus, it can be seen that the all the electricity consumed by the load is from the electricity generated by solar panels in the daytime, when there is no mains supply or when the diesel engine serves as the supplementary energy source. Considering differences of illumination intensity in different seasons and in different regions, the capacity design of the solar panel should be capable of meeting demands even in worst season of sunshine lighting so as to ensure the solar system’s reliable operation. Below is the formula for computing of the solar panel capacity:

Power of solar panel = (Load daily electricity consumption * Margin factor)/ (Peak sunshine hours of worst month*Efficiency of the system). We figure out the solar panel needed should be 11045W .Finally we use 46pcs*245W for this project.

Besides the solar panel capacity calculation,SunMaster also make the optimal design for the solar mounting structure angle and the wiring (2 series+23 parallels). Below are the final drawing. 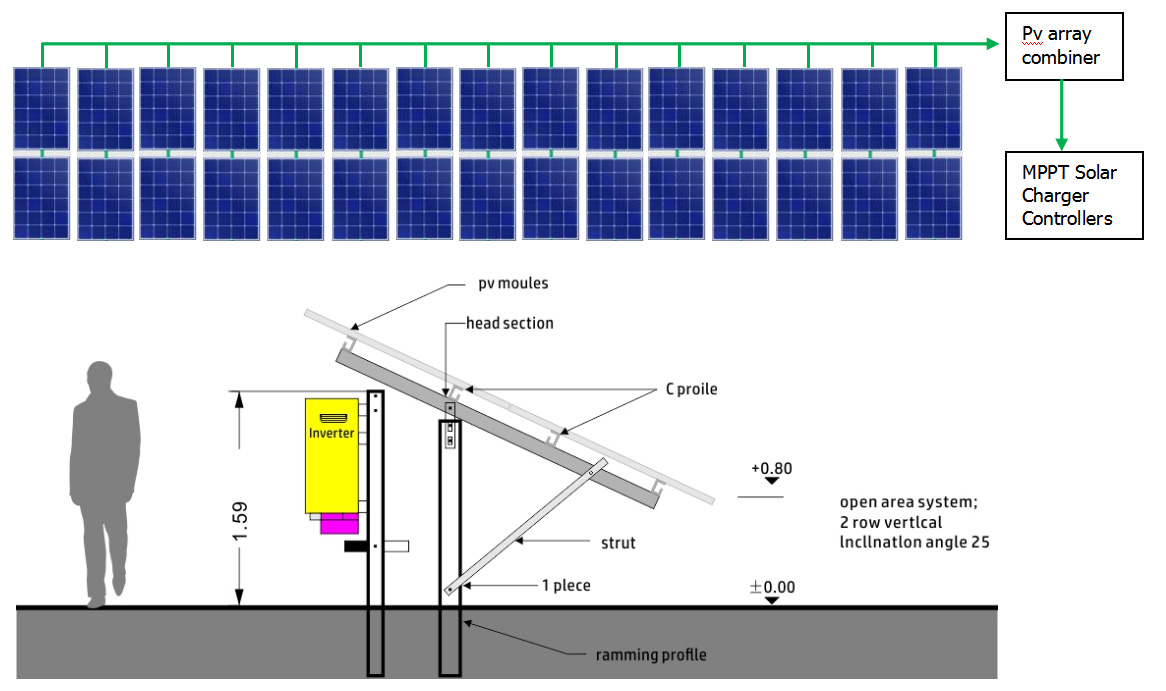 The batteries of the off-grid solar power system is mainly used to store energy and ensure that the load can work normally when the solar radiation is insufficient. In terms of the off-grid solar power system for important equipment, the design of the batteries capacity should take the number of local longest overcast and rainy days into consideration. The ordinary off-grid solar system does not have such high requirement of power supply to the load and considering the cost of the system, the number of overcast and rainy days can be left unconsidered, and the load use can be adjusted according to the actual illumination intensity.

In addition, most off-grid solar PV systems adopt gel batteries, whose depth of discharge generally ranges from 0.5 to 0.7. The batteries’ capacity to be choose can refer to the following formula:

Batteries' capacity = (Daily electricity consumption × Number of successive rainy and overcast days) / Batteries’ depth of discharge. We figure out the battery capacity needed should be 1515Ah48V.Finally we use 40pcs*6V 306Ah Gel Battery for this project. 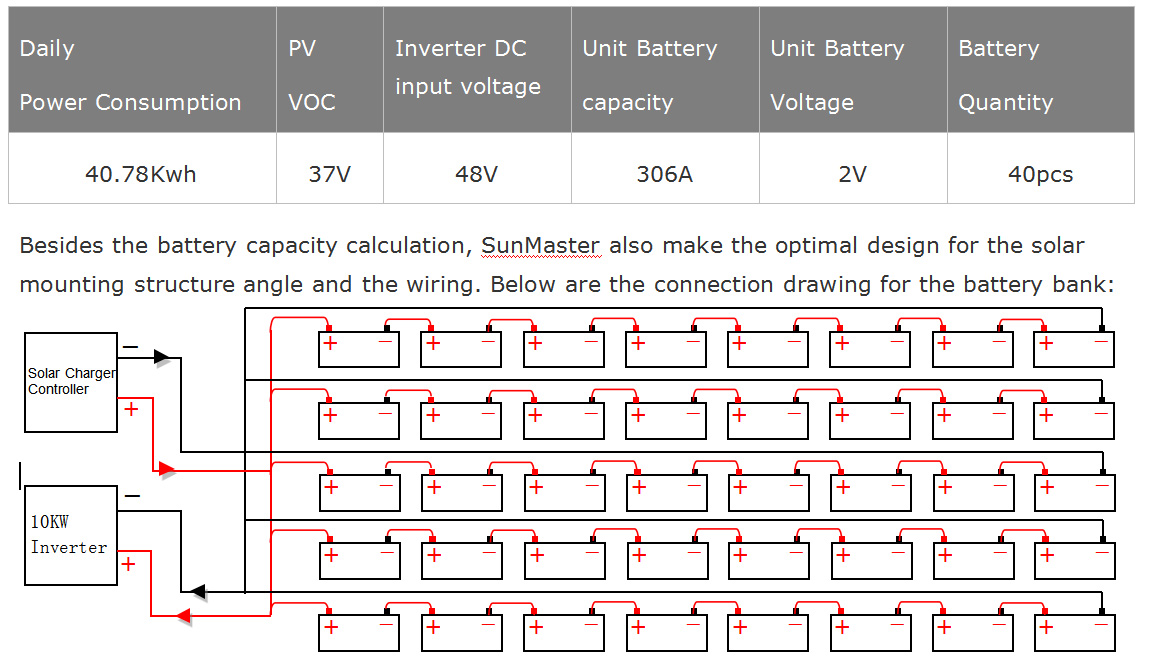 Battery can not  directly on a concrete floor. In this project, the user prepared a cool dry ventilated room for the equipment.

SunMaster make a thermal insulation materialpine flooring board to lay the battery.

BENEFITS OF THE SOLUTION IMPLEMENTED

Going off the grid means that you won’t experience any unpredictable power outages at home. This is because you won’t be tied to the city’s power source, which can experience power interruptions due to freezing rain, sleet storms, or high winds that can damage power lines and equipment.

Power outages are troublesome since they impede productivity and make living conditions uncomfortable.

While interruptions lasting a few minutes to a few hours are nuisances, those that last days or weeks are incredibly stressful since homeowners will fully experience the discomfort during these times. Living without lighting is inconvenient and having to wait for the service to go back up is frustrating.

Installing an off-grid solar system on your home makes it self-sufficient in terms of energy gathering.

Batteries charged with solar energy can allow your home to function without having to worry about storms, rains, winds, cold snaps, and heatwaves that can disrupt power by damaging power lines or increasing energy demand.

The equipment of an off-grid system is standalone, and all you’ll have to worry about is your power demands to avoid power outages.

Going off-grid is excellent for people preparing for calamities that can result in long-term power outages so that they can survive with relative comfort.

Using off-grid renewable energy eliminates your reliance on finite resources like fossil fuels that increase in price as they deplete, while also eliminating the need to pay for electric bills.

Although the initial cost for an off-grid solar system is high, the low monthly rates and low maintenance costs make up for it in the long run.

Off-grid solar systems rely only on the sun to produce energy for a household, which means that there are no monthly electric bills to pay. Maintenance costs are also lower than standard and require only the changing of batteries after 8-10years.

Since the equipment associated with off-grid solar systems are not dependent on the grid, the installation process is much more straightforward than having to rely on complex infrastructure to function.

For instance, the installation of grid-tied systems requires the service of professionals to connect it to the city’s electric grid.

On the other hand, installing an off-grid solar system only requires a homeowner to be knowledgeable of common tools. The process is not as complicated, which could eliminate the need of hiring a professional.

Also taken out of the equation is the costly process of trenching to put the collected solar energy on the grid, which is necessary when going for grid-tied systems.

The inhabitants of rural and remote areas face a significant problem regarding electricity; they have fewer (and less advanced) infrastructure than urbanized places which results in difficulty of connecting to the primary power grid.

The chances of blackouts are higher in remote areas, which makes living conditions uncomfortable. With such limited access to the grid anyway, an off-grid solar system would be perfect for rural households.

If you live in a rural area, an off-grid solar system can make your home self-sufficient and more independent from inconsistent city power. It is also normally cheaper, and gives you more availability to move where there aren’t any city power lines.

5. Keeps the Environment Clean and Green

As with any type of renewable energy, solar power is more green and clean for the environment than fossil fuel energy.

Whether you use off-grid or on-grid solar systems, they will still be more environmentally-friendly than fossil fuel power.

Going off the grid is beneficial to nature as it minimizes the harmful effects of electricity on the environment by not being dependent on burning fossil fuels that end up polluting the air. 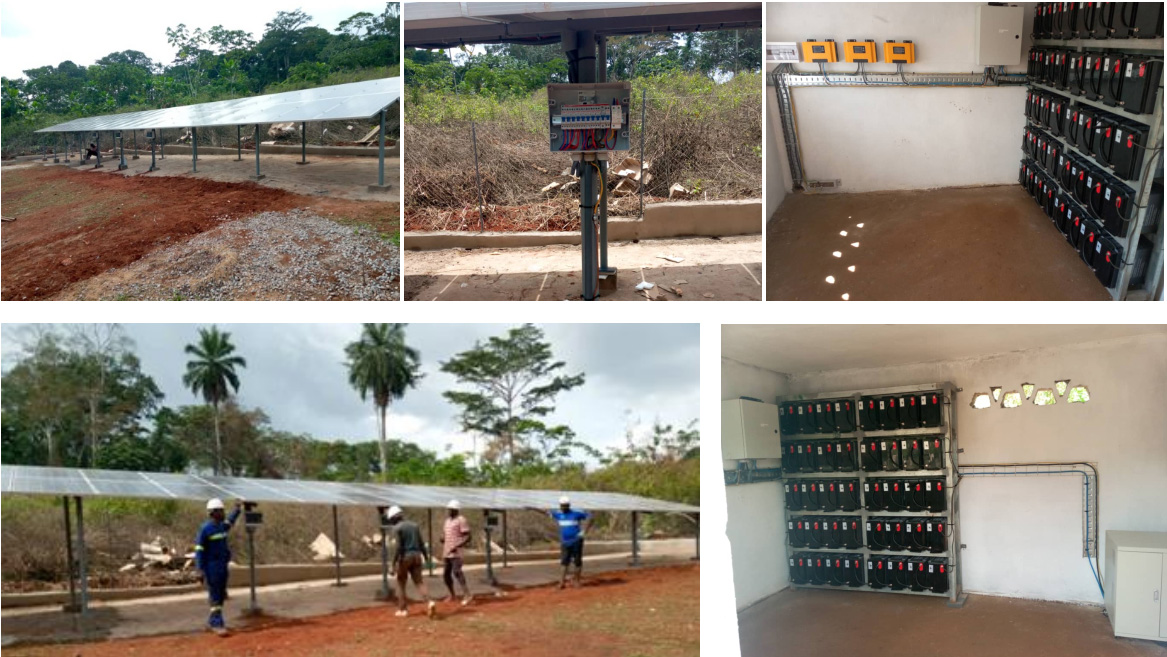